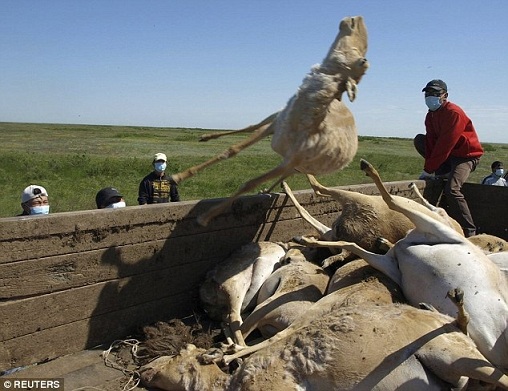 The disease is caused by the peste des petits ruminants virus (PPRV), which is classified in the genus Morbillivirus within the family Paramyxoviridae (King et al. 2012).

Small ruminants play an important role in agricultural food production and in sustainable employment in Nigeria and the control and eradication of PPR is therefore a priority, in order to ease poverty and improve the health and husbandry of animals kept by resource-poor people in this developing country. This study was designed to determine the seroprevalence and distribution of PPRV antibodies in small ruminants in rural households, farms, live animal markets and slaughter slabs across different states in all the agro-ecological zones of Nigeria. This information will be helpful to develop a progressive control programme with the aim to eradicate PPR from Nigeria.

At a 95% confidence level, a sample size of 379 animals per state was calculated. A total of 4548 field serum samples were collected from 12 states across the agro-ecological zones of the country. No animal was known to have been vaccinated against PPRV before or at the time of sampling. Some animals appeared to have clinical signs compatible with PPR during sampling. Small ruminants were transported in vehicles that were often overcrowded, over long distances from the north of the country to the live animal markets in the south. On arrival at the markets, the animals were tied together as they awaited buyers. Any animal not sold is returned to the flock and new animals bought also end up in new flocks. These practices are conducive to outbreaks of diseases. New infections leading to outbreaks normally occur when animals are transported together or when they are tied together (transportation stress, overcrowding and malnutrition) in the live animal markets or kept for safety reasons with a relative from another locality.

There were significant differences in the distribution of PPRV antibodies in small ruminants between states (p = 0.001). The highest seroprevalence was in Taraba State (29.51%), whilst the lowest seroprevalence was observed in Cross River State (14.52%). The highest seroprevalence of PPRV in sheep where n > 6 was in Kano State (33.12%, n = 157) and in goats it was in Taraba State (27.97%, n = 236) (Figure 4). The seroprevalence varied between localities, with a range of 12.64% (Ikot-Omin, Cross River State) to 33.33% (Kassa, Taraba State). An important observation during the course of sampling is the apparent lack of awareness amongst the small-ruminant owners of the vaccination status of their flocks. The control and eradication of PPR is a priority in order to ease poverty and improve the health and husbandry of animals kept by people in developing countries.

For more on this research work, visit https://www.ncbi.nlm.nih.gov/pmc/articles/PMC6324250/