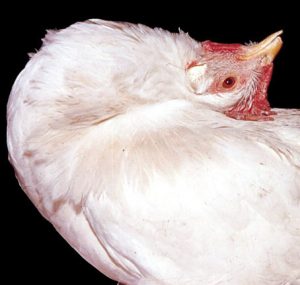 One of the most devastating problems faced by smallholder poultry farmers is the problem of Newcastle disease outbreak within their flock. This remains a big challenge as a result of the high pathogenicity of the Newcastle disease virus. This article provides information on the distinctive symptoms of Newcastle disease to aid effective diagnosis and right approach towards control or management of the disease.

Newcastle disease has been established as a highly contagious viral infection affecting several species of birds, both domestic and wild birds. In most cases, wild birds are affected with the mild form of the disease and they serve as reservoir hosts for the viral infection, thereby spreading it through migration or movement from one environment to the other. Birds of all ages are affected, though young birds are most susceptible. Symptoms of the disease vary from one system of the body to the other i.e., the disease elicit respiratory, digestive and nervous signs which could be mild or very severe depending on the category (strain) of the Newcastle disease virus involved or host species. Mortality resulting from Newcastle disease varies and is sometimes as high as 100% i.e., an entire flock can be wiped out as a result of the disease.

Generally, the commonly observed respiratory symptoms in birds affected by the disease include; sneezing, coughing, gasping for breath and nasal discharges. The digestive or gastrointestinal sign is characterized by a watery greenish diarrhoea. There are several nervous signs of Newcastle disease which include; depression, twisting of the neck, paralysis of wings and legs, muscle tremors and spasm. Other signs of Newcastle disease in poultry are; ruffled (rough) feathers, swelling around the eyes and neck region, reduced or no egg production in layer birds and sudden death. 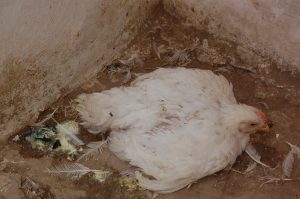 The above listed distinctive symptoms of Newcastle disease when observed within a flock, possesses no cure. The only way to help the birds recover when the signs/symptoms have already manifested is by providing supportive care and antibiotic therapy to prevent secondary bacteria infection. Hence, the proven and most potent option that smallholder farmers should explore to keep their flock safe is to properly vaccinate the birds against Newcastle disease and maintain adequate biosecurity measures.